The Thyroid Gland – An Overview

This information explains about the thyroid gland and how it works.  People with thyroid disease may find it useful to read this information.  A Glossary of Terms is at the end of this page. 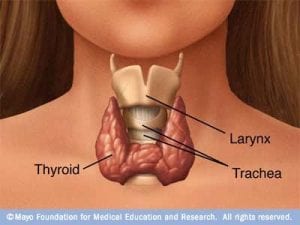 T4 is generally considered to be a pro-hormone because it is inactive and only becomes active when converted to T3. However, some researchers believe that T4 does, in fact, have a function.

T3 is an active hormone and does all the work of regulating the body’s metabolism.

The tissues are unable to use T4, so an enzyme called 5′-deiodinase converts it to T3.  This conversion takes place in the body’s cells and tissues, mainly in the liver. Problems with the liver can upset/affect the body’s conversion of T4 to T3 and can cause problems for the thyroid.

The thyroid needs iodine to make thyroid hormone.  Iodine is found in fish, shellfish, cereals and grains and vegetables (although levels vary depending on the amount of iodine in the soil where the plants are grown). There is also iodine in cow’s milk.

Thyroid problems often run in families and can happen at any age. Things can go wrong with the thyroid in two ways:

Thyroid UK relies on donations so that we can continue to support and campaign for people with thyroid disease and related disorders.  If you have found our information helpful, please do think about donating or becoming a member.

Conversion – the change from one hormone to another

Enzyme – a protein that creates a chemical reaction in the body

Metabolism – the chemical processes within the human body

Pro-hormone – a hormone that is changed into another hormone

Iron and ferritin are extremely important to the thyroid as it needs iron to make thyroid hormone. https://thyroiduk.org/managing-your-illness-underactive/the-role-of-vitamins-and-minerals/the-importance-of-iron-and-ferritin-in-hypothyroidism/

We have updated our Covid-19 Statement because there has been some further research which shows that people who are NOT on thyroid disease treatment are having issues: https://healthunlocked.com/thyroiduk/posts/144087102/thyroid-uk-covid-19-statement-has-been-updated

Any cookies that may not be particularly necessary for the website to function and is used specifically to collect user personal data via analytics, ads, other embedded contents are termed as non-necessary cookies. It is mandatory to procure user consent prior to running these cookies on your website.

Analytical cookies are used to understand how visitors interact with the website. These cookies help provide information on metrics the number of visitors, bounce rate, traffic source, etc.

Performance cookies are used to understand and analyze the key performance indexes of the website which helps in delivering a better user experience for the visitors.

Undefined cookies are those that are being analyzed and have not been classified into a category as yet.

Advertisement cookies are used to provide visitors with relevant ads and marketing campaigns. These cookies track visitors across websites and collect information to provide customized ads.