The Endocrine System – An Overview

The Endocrine System – An Overview 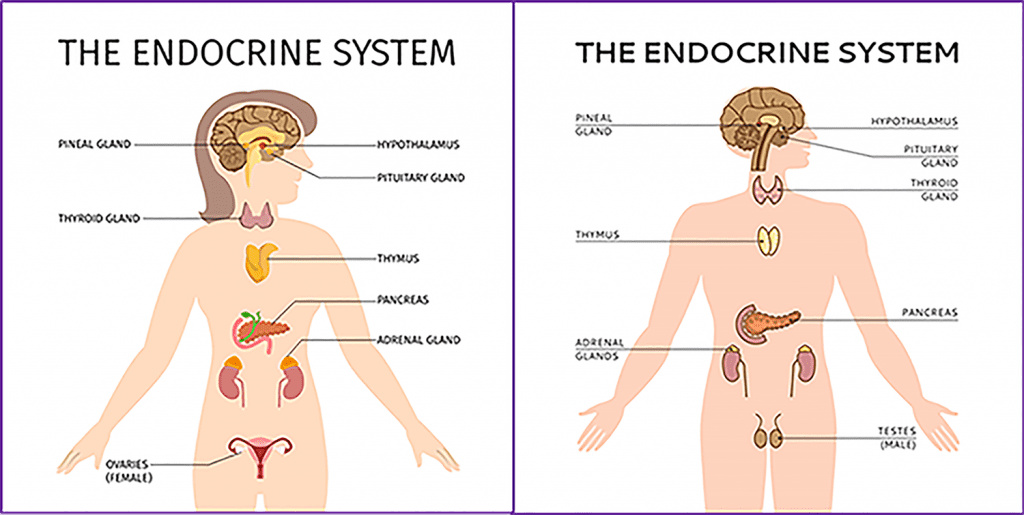 The endocrine system is a collection of glands that produce hormones (chemical messengers).  These hormones pass directly into the bloodstream to control metabolism, growth and sexual development.

The endocrine system consists of the following glands:

The hormones produced by these glands travel to various organs, glands and tissues in the body and communicate with them.  Once they have reached their particular organ or tissue they bind to specific proteins on the surface of the cell. These proteins are called receptors.  When they have bound to the receptor, this causes a response in that particular organ or tissue (they tell it what to do).

Sometimes things can go wrong in the endocrine system and various illnesses can be caused.

A Brief Overview of these Glands

The pituitary gland has two lobes – the anterior lobe and the posterior lobe.

The anterior lobe of the pituitary gland produces the following hormones:

The posterior lobe of the pituitary gland produces the following hormones:

The thyroid gland is a small butterfly shaped gland with two lobes. It is situated in the front of your neck, just below the Adams Apple.

The thyroid gland produces two main hormones which are very important for growth and development.  One is called thyroxine (T4) and the other is called triiodothyronine (T3).  T4 is converted to T3 in the body’s cells and tissues.  T3 is an active hormone and is needed by all of the cells and tissues of the body.

The thyroid gland also produces another hormone called calcitonin, which works alongside parathyroid hormone in the maintenance of calcium levels in the blood.

These pea-sized glands are attached to the thyroid gland and produce parathyroid hormone (PTH) which controls blood calcium levels.

The adrenal glands are situated at the top of the kidneys.  Each adrenal gland is divided into two areas, the cortex and the medulla. Each area produces different hormones.

The cortex produces the following:

The testes are two egg-shaped male reproductive organs.  They produce the hormone testosterone, which is responsible for the male characteristics of the body. Testosterone is needed for the production of sperm.  Men also produce a small amount of progesterone and oestrogen.

The ovaries are two oval-shaped female reproductive organs.  They produce the female sex hormones oestrogen and progesterone, which are responsible for the female characteristics of the body.  Oestrogen strengthens bones and has a protective effect on the heart, and progesterone causes the womb’s lining to thicken ready for pregnancy.  The ovaries also produce small amounts of testosterone.

Thyroid UK relies on donations so that we can continue to support and campaign for people with thyroid disease and related disorders.  If you have found our information helpful, please do think about donating or becoming a member.

Anterior – situated before or at the front

Excrete – to expel from the body

Inflammation – redness, swelling, pain, tenderness, heat, and disturbed function of an area of the body

Metabolism – the chemical processes within the human body

Posterior – situated behind or at the rear

Iron and ferritin are extremely important to the thyroid as it needs iron to make thyroid hormone. https://thyroiduk.org/managing-your-illness-underactive/the-role-of-vitamins-and-minerals/the-importance-of-iron-and-ferritin-in-hypothyroidism/

We have updated our Covid-19 Statement because there has been some further research which shows that people who are NOT on thyroid disease treatment are having issues: https://healthunlocked.com/thyroiduk/posts/144087102/thyroid-uk-covid-19-statement-has-been-updated

Any cookies that may not be particularly necessary for the website to function and is used specifically to collect user personal data via analytics, ads, other embedded contents are termed as non-necessary cookies. It is mandatory to procure user consent prior to running these cookies on your website.

Analytical cookies are used to understand how visitors interact with the website. These cookies help provide information on metrics the number of visitors, bounce rate, traffic source, etc.

Performance cookies are used to understand and analyze the key performance indexes of the website which helps in delivering a better user experience for the visitors.

Undefined cookies are those that are being analyzed and have not been classified into a category as yet.

Advertisement cookies are used to provide visitors with relevant ads and marketing campaigns. These cookies track visitors across websites and collect information to provide customized ads.